The existence of the Lightning Network enables new types of online communities where participation and access to content is dependent on individual users making Bitcoin micropayments. These new communities can operate without a central authority, and without a middleman taking a cut of the profit.

In this post, I will briefly describe the weaknesses of the existing models for Lightning monetization, and how these problems will be solved when PTLC payment channels are the standard in Lightning Network.

If we imagine a world where social media is decentralized, content will no longer be hosted by large companies like Twitter, Facebook, Spotify, and Youtube. Instead, we will see individuals and independent hosting providers relaying and aggregating content that is signed cryptographically by individual users. This raises the question of how will these relays/aggregators be incentivized to host content. Lightning payments are the obvious answer.

What is wrong with the tipping model?

There are currently attempts to create models of monetization that use Lightning network to reward content creators:

These apps use a voluntary payment model, where any user can access the content, and then decide how much they want to pay in tips to reward the content creator.

It is the digital equivalent of “busking” on a sidewalk, and hoping that people will drop a few coins in your hat.

A better, fairer model would be one where the consumer is required to make a payment to get access to the content. 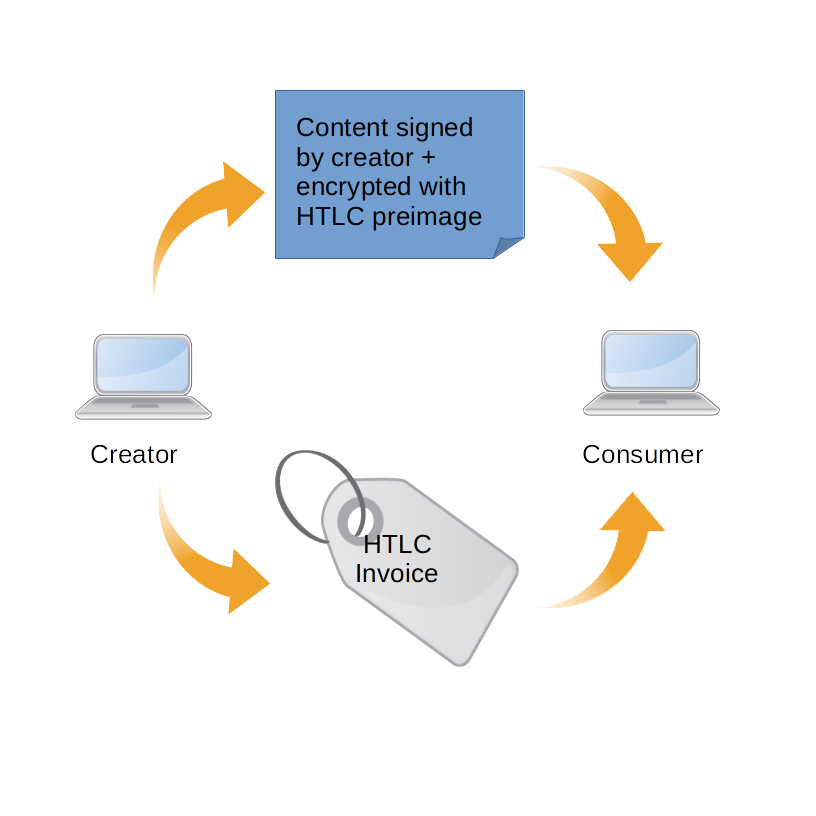 Unfortunately, this approach requires the consumer to trust the honesty of the content seller. A malicious seller could create an invoice using an invalid decryption key as the preimage. The buyer would make the Lightning payment, and only realize after the payment that they got an invalid decryption key. The buyer has no way to verify the validity of the invoice until it is too late, and they have already lost their funds.

This model of monetization can work if the buyer is able to trust the seller. This might be true if the seller is a large, reputable institution, but this model breaks down if we try to extend it to a peer-to-peer decentralized network, where all connections are assumed to be trustless.

Fortunately, there is a way to make the payment trustless for both the buyer and the seller, but it requires that Lightning use PTLC payment channels.

So now that we know that PTLC invoices use elliptic curve points, we can take advantage of the distributive property of points on elliptic curves:

where s1 and s2 are scalars, and G is an elliptic curve.

The basic idea for selling content is as follows:

If Carol tries to give Bob an invalid invoice, Bob will know before he pays the invoice.

The above example assumes that Bob is able to trust that the value of p1 is valid.

Now any node in the network can relay content from any creator, and earn a profit by selling it trustlessly to any consumer. The consumer does not have to trust that the relay is an honest actor, and vice versa. The only requirement is that the payment point generated by the original content creator must be publicly known and trusted.

The Squeak Protocol is a social media protocol that utilizes the properties of PTLCs on lightning to create a trustless, decentralized alternative to Twitter.

With the Squeak Protocol, any user can download an encrypted post (called a “squeak”), and verify several properties of the squeak:

After these properties have been verified, the consumer can request an invoice from the seller that will unlock the decrypted content of the squeak (after payment):

If the consumer then clicks the “buy” button, they will be presented with an offer that they received from the seller: 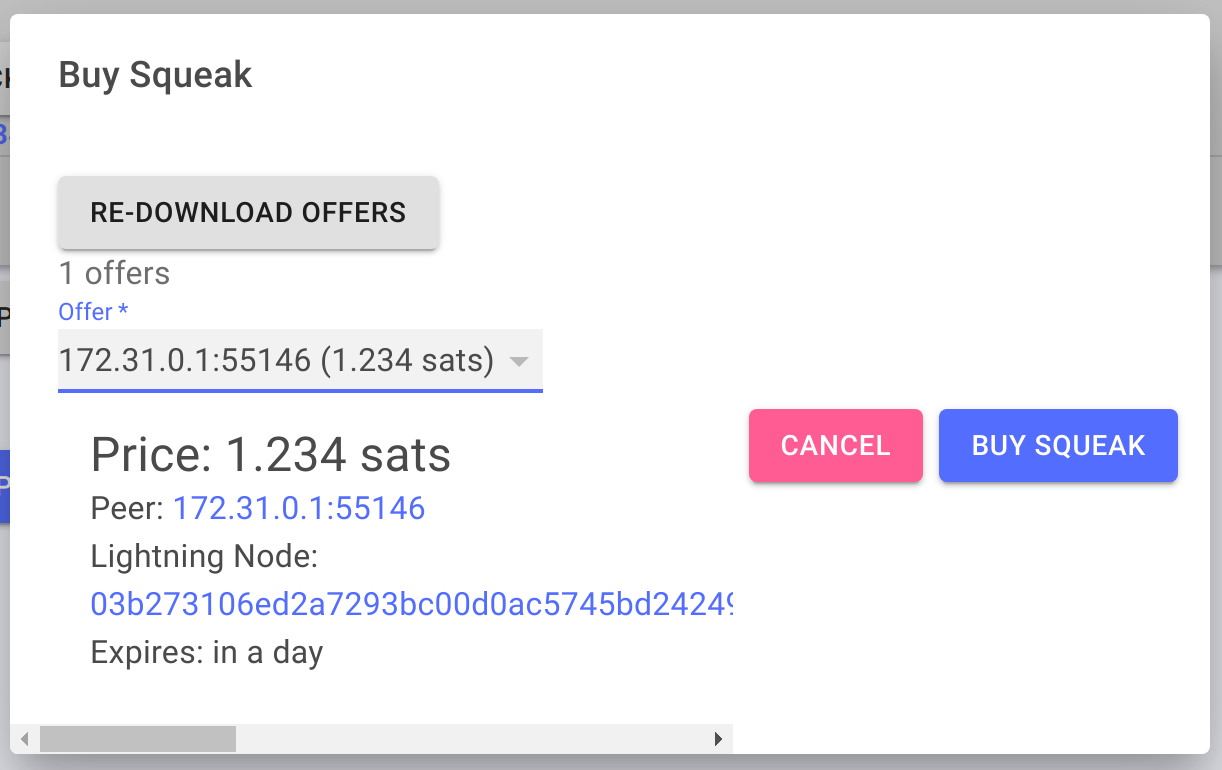 Then, if the consumer decides that the squeak is worth the price, they can pay the invoice to unlock the squeak:

The consumer now has a copy of the unlocked squeak on their own node, and they can now re-sell the squeak to other nodes in the network.

How squeaks work under the hood

There are two components in a squeak:

A squeak header has the following fields:

There are also external fields outside the header:

There is also a squeak hash, which is derived from the bytes of the squeak header using SHA256.

How a squeak is created

When a user creates a squeak, the following happens:

All of these values are used to populate the squeak header. After the header is created:

Properties of a squeak

After a squeak is created, it can be shared and validated on any node.

A validated squeak has the following properies:

How a user interacts with a squeak

For example, if Alice authored a squeak, and Bob obtained a copy of the squeak:

However, because Bob does not have the decryption key:

How a user unlocks the content of a squeak

Now Bob has a choice to make. Is he interested in reading the squeak that Alice authored, given everything he knows about the squeak?

If Bob wants to unlock the content, he can send a message to all of his peers in the network expressing interest in buying the decryption key for the squeak.

Bob’s peers in the network (only those who already have a copy of the decryption key) will respond to Bob by sending him invoices as described in the earlier section.

Bob can now browse through the offers, and make a payment to any peer that offered him a valid invoice. Bob knows which invoices are valid because he can validate against paymentPoint field of the squeak header, using the elliptic curve math described earlier.

When Bob makes a Lightning payment to one of the sellers, he will obtain the preimage of the invoice. This preimage can be used to get the decryption key:

Now Bob can read the content of the squeak!

Try it out for yourself

There is a working implementation of the core Squeak Protocol as a Python library here: https://github.com/squeaknode/squeak

And there is an implementation of a full node running the Squeak Protocol here: https://github.com/squeaknode/squeaknode